Showing posts from 2022
Show all

Near Custer, South Dakota there is a road that winds left, sharp right, and goes up and down into tunnels.  Nominal risks, vehicle dependant, and preparedness provide a road trip experience known as, Driving the Needles. The Needles of the Black Hills of South Dakota are a region of eroded granite pillars, towers, and spires within Custer State Park. Popular with rock climbers and tourists alike, the Needles are accessed from the Needles Highway, which is a part of Sylvan Lake Road (SD 87/89). The Cathedral Spires and Limber Pine Natural Area, a 637-acre portion of the Needles containing six ridges of pillars and a disjunct stand of limber pine, was designated a National Natural Landmark in 1976. The Needles were the original site proposed for the Mount Rushmore carvings. The sculptor Gutzon Borglum rejected the location because of the granite's poor quality and the fact that they were too thin to support the sculptures.  I heard that The Needles attract approximately 300,000 peopl
Post a Comment
Location: Texas, USA
Read more

A Man's Way of Light 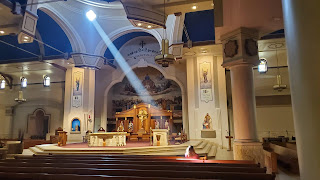 "There is no handbook of life that I can read to help me... no one told me it was going to get confusing!" yells a young man on social media.   His rant received a bajillion views on the Vlog which explains there might be those who agree.  But the young influencer's constant mistakes in life only mean there is a lack of personal trajectory.   I agree, life is confusing.  But there is a book of life and specifically, a letter for men to help curve struggles during life's journey. The following letter is ascribed to Barnabas of Cyprus (56) a co-worker of the Apostle Paul who ministered to the Gentiles during early Christendom.  Today, its message still has purpose and meaning for all men.  The letter has helped me navigate through the darkest moments of my life and offers points for life-efforts and daily destinations.  I share the letter below:    C onsider now the way of light; any man who is bent on reaching his appointed goal must be very careful in all he does. N
Post a Comment
Read more

The Face of God

Recently, while exploring the central United States, we pushed northward towards Wyoming. Eagerly driving through morning darkness, the sun emerged from the landscape only to reveal the Grand Tetons.  This was truly extraordinary, and later became a spiritual experience.  Four months of planning a reciprocal traverse to Canada had not prepared us for the amazing environment in which we now stood.  We found something special.  Simply, God's gentle touch on this region of the planet was a gift to mankind.   As such, it was preserved by the efforts made by John D. Rockefeller in the early 19th century. His purchases and the national work thereafter preserved this region known as the Grand Tetons National Park.  Hiking along the 40-mile-long mountain range we stumble onto a Catholic chapel that's perched on the Bay of Jackson Lake.  Since 1937, it remains pristine and preserved just like the Tetons region.  The Chapel of the Sacred Heart still operates today and when we entered, we
2 comments
Read more

I remember the day I let go of my son's hand so that he could walk for the first time. He was eleven months.  It was nerve-racking to think he might fall, slip or bust a lip.  But instead, I let go so that he may cross the copious bedroom floor. And still, I peaked, stood suppressed around the corner to make sure that he did not fall. My son has graduated from various universities with credentials in intelligence, security, cyber studies, and analytics.  He is older now with larger hands.  And with the same practices I used when he was younger, I still use today.  Parents, avoid a disgruntled college graduate who resents a pre-set path by letting go of fears before your young adult walks across the collegiate stage.  Walking independently is to learning as decision making is to confidence. Both are growth factors that build a social code between child and parent.  It's based on mutual respect.  Throughout the sprouting moments of my son's relationship with me, I always en
Post a Comment
Read more

As another late night at the office was in the making, I heard a weather alert on the television.  Thinking very little about Watches and Warnings, I grabbed my keys and walked out the door.  I turned and said to my family, "See you later tonight!"  Unconscience to nature's unyielding presence, I proceeded out of my home and heard something ominous.  As I unlocked my truck and opened the door, I stopped mid-way.  Frozen by sounds of crashing cars, roaring rubber on asphalt, and screams in my neighborhood I tilted my head up for no reason.  I saw a whirlwind of debris above my home.   It became silent. Then abruptly; rumbles, whirls, and howling hurt my ears. I ran back into the house screaming to my family to come downstairs into the small laundry room.  It was too late, the destruction had started.  While running to the safe place, I saw backyard possessions lifting as if a planetary vacuum was cleaning house.  Fences were ripped from their posts and barbeque pits had no
Post a Comment
Read more

Today's blog is a follow-up to a vlog that I released on New Years' Eve 2021.  The video  recaps personal life points that spoke about unhealthy behaviors during the height of Covid-19.  It depicts how I pivoted towards improving my life and deepening my faith .  I want to elaborate a bit more on these subjects after poignant questions were asked by a reader. Some people seem to appease my creative hobby, " Catholic Camper " and others view it with purpose.  With this particular piece, Recap: 2021   the responses after its launch were like bolts of illuminating lighting during a stormy dark night; exciting!   One question by a particular viewer caught my attention, "So what is the rest of the story?  His question contends me to explain myself further.  And s o, I will answer here, in written form.  Specifically, the reader asks,  "What changes did you notice in yourself when you committed to prayer, a communication partner, and quiet time?"  First, pray
2 comments
Read more

- January 14, 2022
Often, I feel like the only person that needs to get away.  People are not so different than me. Many seek something greater than we, and while exploring is a way to unwind, its overshadowed by the grind.  This explorer found ground one day and someone who reminded me of why I venture away.  At times I want a break because stepping back from the grind allows me the freedom to explore. Recently, I discovered there are people that explore the same path as myself. While camping in the east woods of Texas, a young man, Pablo, from San Antonio drove into a nearby campsite where I had pitched a tent.  His means of exploration was simple; an orange breasted Royal Enfield motorcycle. He setup basecamp with nothing more than a ground tent from London, a blue chair, and smokes.  Pablo's journey lead him to this moment. Indeed, he had the same idea; to get off the grind, onto the open road, and explore the unknown. The next day as the dew rose above the pine trees a new dawn emerged. Before P
Post a Comment
Read more
More posts